The battle royale trope has been a staple in writing stories for anime. It usually starts with a clueless protagonist being forced into a game of carnage for survival. Along the way, he encounters friends and enemies which ultimately make his life harder in the survival game. Classroom of the Elite doesn’t do that – it’s probably the most mundane battle royale story I’ve seen and here’s why.

Classroom of the Elite is an anime adaptation of a light novel series written by Shogo Kinugasa. The anime is directed by Seiji Kishi and Hiroyuki Hashimoto, produced by Lerche studio (Danganronpa, Toilet-Bound Hanako-kun, Assassination Classroom) which aired back in July 2017.

The anime revolves around Kiyotaka Ayanokoji, a distant and quiet high school student in the Tokyo Metropolitan Advanced Nurturing School which is dedicated to mold the future generation of Japan. In this school campus, students are allotted a great deal of freedom as they would in the real world and provided points as currency to buy anything so long as they do well in their classes and other extracurricular activities.

Being a psychological thriller, it was entertaining and mind-boggling to have Ayanokoji and the female lead, Suzune Horitaka, go through all of these challenges imposed by the school in an “out-of-the-box” manner. When teachers told them that they can use points to buy anything, they abused that rule and bought literally anything they needed – information, loyalty, grades, and other things. It was the typical feel for a battle royale-based story in an anime series.

What set me off is the main protagonist himself, Ayanokoji. His distant and quiet personality makes it hard as a viewer to sympathize and understand what he is thinking. Although putting viewers in the dark is a valid writing technique, it’s just frustrating that this is the main idea all throughout the show. Most of the time, I find myself looking at the story in the third person perspective, completely ignorant and unknowing of how events transpire in the anime series.

In comparison to other similar shows like Darwin’s Game, Mirai Nikki, and by a long shot Hyouka, the main protagonist is in constant communication with the audience through scenes and story segments where they cook up their plans for success. For Hyouka, the main protagonist was calm and collected but we were given the heads up about what was happening through the thought process being provided in his internal monologues. The protagonists from Darwin’s Game and Mirai Nikki, despite being clueless, were easy to sympathize with as they kept on learning the mechanics of the game and with that, allowed us to step into the show’s world.

It’s frustrating for me, as a viewer, to watch a show like Classroom of the Elite and be kept in the dark for the majority of the whole show without any sort of logical process and understanding of why events happen. Events like “we screwed over this person” without telling the viewer how they did that is just frustrating. It’s like a magician showing but not telling except that the appeal of the spectacle isn’t really found in the ignorance of events – it all just seems pure BS to me.

If the writing was centered around the perspective of the main female lead, Suzune Horitaka, then it would have probably made for a better story in which the viewers can put their shoes in a character. Compared to Ayanokoji, Horitaka has an explained motivation on why she does things and her line of thought is better explained. Coupled with an already common anime trope, the least that Classroom of the Elite could have done in the writing department is to depict the story through the lens of an understandable character – regardless if they are overpowered. 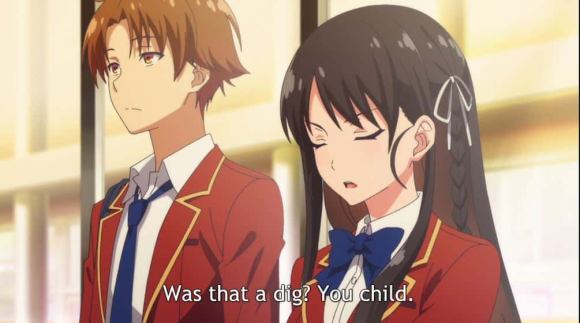 Few attempts were made to make the viewer understand Ayanokoji as a main protagonist and his motivations with some glimpses of his past ala-Norman from The Promised Neverland. However, this was not enough to make the show any more entertaining, as far as I am concerned. It was frustrating, confusing and I stuck to it with some hope that the writing could have been better for Ayanokoji with the hints to his backstory.

Share some of your favorite battle-royale themed shows in the comments below!

It’s hard to come by knowledgeable people on this subject, but you sound like you know what you’re talking about! Thanks

I can understand why you felt the way you did about the narrative, but the reason for it is because they want Ayanokoji to remain mysterious. After all, while we follow him now, it’s implied that he’s going to be an antagonist in the future by the end.

And when that happens, it’s likely Horikita that will become our new main character that we follow. This season of the show is basically setting that up, with Horikita learning how to rely on others and improving throughout the series and ultimately having to rely on Ayanokoji.

That’s what I thought after watching this at least, and it’d be great to see but I wonder if Classroom of the Elite will ever get a sequel. Haven’t looked into the source material for this. Unfortunately the edgy philosophical quotes and the fan service that didn’t feel like it fit the tone probably didn’t help the anime’s case in getting a sequel.

I thought that the sudden switch from protagonist to antagonist was possible. But then again, a second season looks bleak and the whole setting the POV on Ayanokoji is just frustrating to go through.

And you’re right, the edgy philosophical quotes and right-in-your-face fan service shots were kinda too much. Although it is a work of fiction, the whole idea that high school kids are this edgy doesn’t really ground the viewers to some semblance of reality and, as a result, makes the story hard to relate to.

I personally liked the way they framed Ayanokoji as this protagonist that you basically just observed, without knowing what he was actually up to. But I also think that another season following Horikita would be awesome.

Just one of those things where all we can do is wait and see.