FIRST LOOK – Re:ZERO was a popular anime series in the year 2016. Although I may have been late to the party, it’s better than never as I may put it. 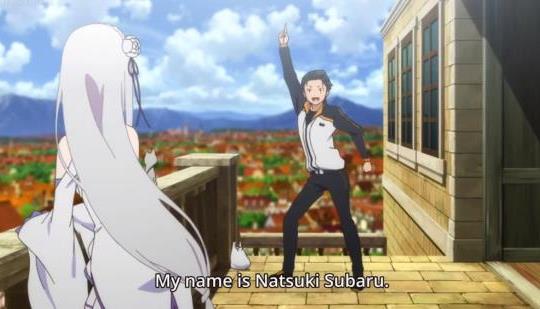 The first episode centers around the hikikomori, Natsuki Subaru, as he is suddenly transported to a medieval-aged world filled with magic and fantasy. He meets a silver-haired girl who introduces herself as “Satella” and a spirit named “Puck” after they save him from a group of thugs.

He offers his help to this girl in finding her stolen insignia which leads them to the slums of the city. It all goes wrong when Subaru discovers that the building they believed to be the whereabouts of the insignia was, in fact, a murder scene – and they were going to be killed as well.

Subaru, as a character, is surprisingly perceptive and just outright dumb at some times. He displays this by using the system of bartering as means of re-acquiring the stolen insignia which was going to be sold by some black market shop. However, he is very tactless about what he says.

Being a person who has suddenly been transported into an alternate fantasy world set in the medieval era, you should’ve developed the mindset that “not all you know will apply in this place and you should be extra-careful about what you do.”

But no, not our boy, Natsuki Subaru.

I would’ve loved this series if only Subaru got his act straight and got self-aware but no, he doesn’t. The only thing that’s piqued my interest in this anime series is the: how’s, where’s, and why’s?

Why is Subaru here? How? Where is ‘here‘ exactly?

I, honestly, am annoyed of Subaru’s character as a whole – reminds me of Kirito except that he is very much aware that he’s a dumb piece of meat.

Re:ZERO can easily be described as a deconstruction of the whole “trapped in an alternative world” scenario with some dark elements shoved into it. This episode ended with the death of a main male and female lead but somehow doesn’t matter since the main male character has the ability to go back in a specific point in time – kind of like a spawn point.

This anime series has definitely hooked me in at the end with more questions: why was Subaru transported into this world? Why can he revert time? What is so significant with Satella? Who is this female murderer? And other more questions.

I will finish this series as soon as I can (if I survive). It was quite a bummer why I didn’t watched and followed along this series as it aired but it’s better than not ever watching it.

Also I don’t like gore. Never have I liked gore. I almost dropped Attack on Titan when it first came out as I saw Eren’s mom being devoured slowly by a creepy-looking titan. That does not sit well with me.

I’ve already been spoiled about some points of this series so it’s okay to spoil but it’ll ruin my viewing experience though (wherever your conscience lies, dear reader).