#12DaysOfAnime – As someone who is still a year before graduating high school, discovering the anime series Oregairu has been quite entertaining for me. It is a show that focuses on a high school setting with a much deeper lens, in comparison to other shows set in the same place. Thus, let me tell you how Oregairu has been unique and interesting for me.

END_OF_DOCUMENT_TOKEN_TO_BE_REPLACED

#12DaysOfAnime – As the textbooks might tell you, people have always tried to do every thing in the most perfect way possible. From how machines work to how we all physically look, the concept of “perfection” has always plagued our minds and thus we strive to achieve “perfection.” But being “perfect” isn’t always enough and here’s why…

END_OF_DOCUMENT_TOKEN_TO_BE_REPLACED

Before everything else, you should totally check out Kat’s blog entry about misunderstanding hate from the Harry Potter books.

This month’s blog tour has been quite a challenge for, not only me, but the majority of everyone in OWLS. The prompt, “Diplomacy,” has so many perspectives to discuss about that choosing one is proving to be difficult. So I decided why not make it a little bit confusing for me by using a show that’s dialogue-heavy, Oregairu.

An anime series known for its deep and mind-boggling hits about high school life and society, I found Oregairu to be the best basis material for the “Diplomacy” prompt as the show is centered around the politics of a regular high school. Before we dive in, spoilers are in great abundance here and if you do not take kindly to that, avert your eyes!

END_OF_DOCUMENT_TOKEN_TO_BE_REPLACED

Quotes can affect us in many different ways. Some people use it as to motivate themselves while others use it as part of their life philosophy. I could categorize myself as the second type of people when it comes to this quote.

END_OF_DOCUMENT_TOKEN_TO_BE_REPLACED

Day 27: Most Badass Scene From Any Anime Character

What makes something badass? That’s a pretty subjective question. Usually it all falls down to the observer to analyze every event: motion, actions, and dialogue – in order to rightfully say that this event was the most badass they’ve seen from any person.

Most of the community would choose fight scenes or flashy acts from their favorite anime characters. But this one scene from Hikigaya Hachiman, the main protagonist of Oregairu.

END_OF_DOCUMENT_TOKEN_TO_BE_REPLACED

Day 13: Anime Character that I am most similar to

If I were to pick out an anime character that shares most of my traits, I would have a tough time deciding who fits me best. Let’s just say that my traits are very contradicting to some extent and I end up being similar to a lot of characters. 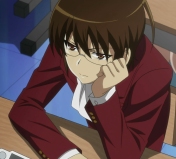 For starters, I could be a mix of Oreki Houtarou and Hikigaya Hachiman since I have a very lazy personality and operate by reading between the lines, assuming the worst in every situation. At the same time, I end up helping and being friendly to other people which ends up me being somewhat similar to Hachiman – although I’m not really that much concerned when it comes to peers.

It is possible that I could be similar to Keima Katsuragi since I am pretty much in the “life is such a shitty game” phase and I had a similar experience when it comes to the whole Chihiro and Keima fiasco wherein I ended up flirting with someone but wasn’t expecting any mutual affection so, yeah, you get the picture.

I could be compared to Kousei Arima since I am a pianist and at the same time, I am pretty much soft-spoken to people who I don’t know but end up being close and interactive to my friends and colleagues. 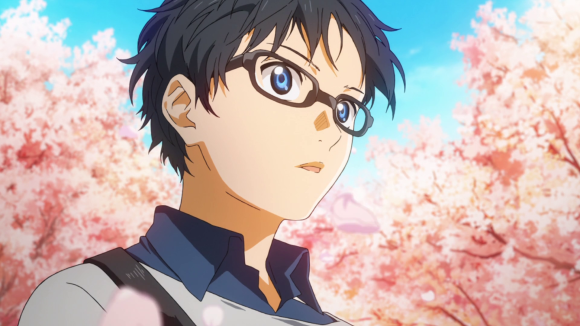 Honestly, I have a hard time picking out an anime character that resembles me the most. If there was a character with the same personalities as Oreki Houtarou, Hikigaya Hachiman, Keima Katsuragi and Kousei Arima, then that’d be probably the character I’d pick for this.

But alas, I don’t know any anime character that resembles me the most. I can’t even narrow out from the four characters I mentioned just now since in a sense, Oreki is almost there, Hikigaya is too extreme, Keima and Kousei are only similar on some aspects.

So I guess Oreki is the closest to my personality? Honestly, I’m pretty much iffy about it.

Any other characters that come to mind? Let me know in the comments.

As of now, I would say that the best and my favorite male character ever would be Hikigaya Hachiman. 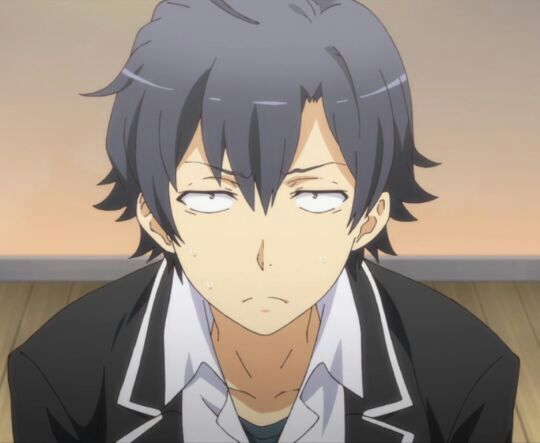 For me, Hachiman is probably the most relatable character out there considering we operate on the same things. In real life, I usually try to look into the negative side of people’s actions, try to be really logical, and dismiss people’s feelings as if they were nothing in favor of achieving some sort of “right” that I have defined by myself.

At the first half of the Oregairu anime series, Hachiman is introduced as a loner, someone who is very much hostile to social life, and despises everyone and calls them acting out a fake youth.

However, as he joins the Volunteer Service Club, he gets to meet interesting people like Yukino Yukinoshita, Yui Yuigahama and others which somewhat change his point of view.

Unlike other characters in anime series, Hachiman admits his own flaws and this is how you can tell that a certain character has developed so wonderfully to the point that they are written to be self-aware of their intentions and how they are either good or bad.

In Hachiman’s case, he was always told to be lacking self-respect, who would sacrifice himself despite denying that he was doing it for others. We can call Hachiman as a sort of good villain. Someone whose actions seem too cruel and disgusting but in the end of the day, he desires to achieve something right. 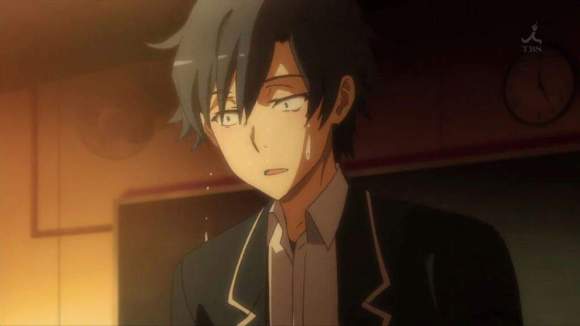 He wants something genuine which is what he hopes to achieve with Yui and Yukino.

This is huge for a character that is depicted to be cold-hearted, alone, and probably would care less for feelings. It goes to prove that Hachiman as a character is human and realizes that.

Hikigaya Hachiman is an incredible character. He’s witty, disgusting and tries to right in his own way despite the disapproval of the majority. Probably this is why he’s deemed as the “Batman” of anime – he does things in the dark but his intentions are for the good of everyone. 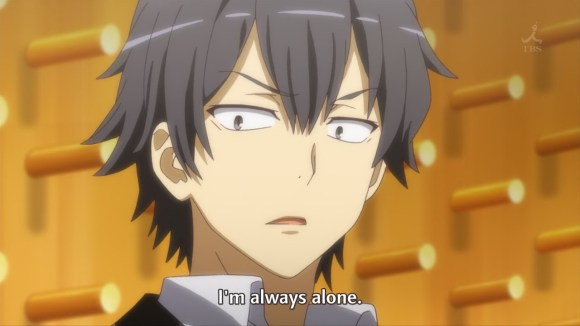 These are the reasons why Hikigaya Hachiman, for me, is probably my most favorite character ever. No one can compare to this character enough. I mean, just like my article on my favorite anime series, this current article would not suffice to describe Hachiman in his full glory.

Hachiman is a hero that we all need but not we truly deserve. 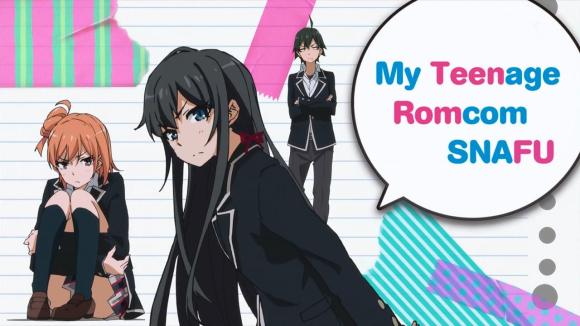 Throughout the years, I have had many favorite anime series but as of late, I love the anime series, My Teen Romantic Comedy: SNAFU or to some its called Oregairu. 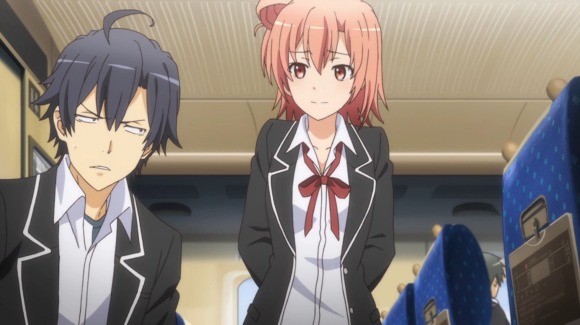 I have a very great interest in stories that try to tackle the psychological and reasoning aspects of the characters. In this series, we focus on our main characters Hikigaya, Yui, and Yukino as they become members of the school’s service club and try to solve the problems of their clients – mainly high school students.

It was a great portrayal of the normal high school life and how twisted relationships become. Bullying, social climbing, packs, those who are called nerds and those who are deemed cool – everything about a high school society is wonderfully portrayed in the series.

Another thing is the logical thinking of our main characters. You could say that they are the type of people who try to read between the lines. People who always have their guard up and can see right through you – well, for the exception of Yui, since she serves as the viewer’s guide to everything that’s happening in the series.

Hikigaya Hachiman is an interesting character. He always tries to read between the lines and deems that everyone around him has an ulterior motive. He always assumes for the worst and has no self-respect. Which gets interesting since he usually uses his own dignity in order to help out with a problem since it is the most efficient way – much to the disgust of Yui, Yukino and those who feel really deeply for him. 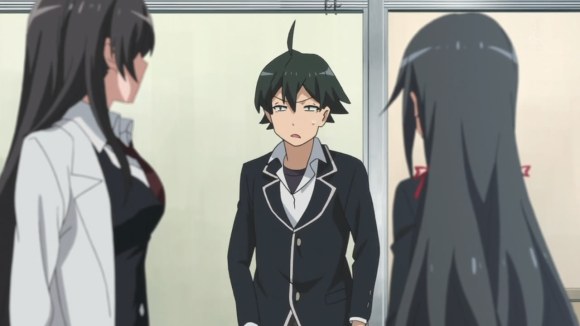 He’s the kind of guy that has good intentions but does things really wrongly and that makes the series somewhat interesting and entertaining.

The concept of the story is in the title itself: My Teen Romantic Comedy: SNAFU. The thing here is that Hikigaya Hachiman is supposed to be in a teen romantic comedy but it’s not really what it seems to be. It’s sort of like a deconstruction of the rom-com genre since every girl can find him charming because of what he does but they disgust him because of his really low methods. 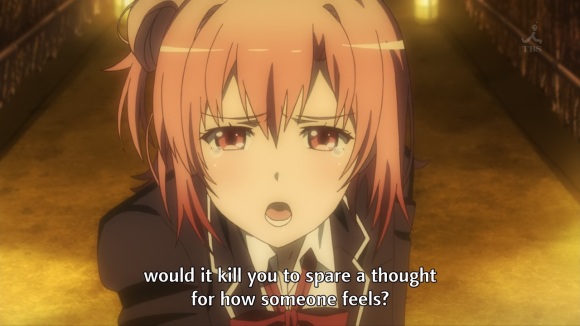 The psychological aspects, the relationships, the conversations and the characters got me to love this anime series as I do today and I don’t think there’s probably a substitute since Sagrada Reset was my best bet – and that doesn’t seem to be working out quite well.

Overall, Oregairu is one of those anime series that needs your full attention and understanding while viewing. Characters drop down hints about their current situations, there’s a lot of wordplay, ulterior motives going around that get the viewer either really confused or really riled up because they’ve sort of lived these experiences. 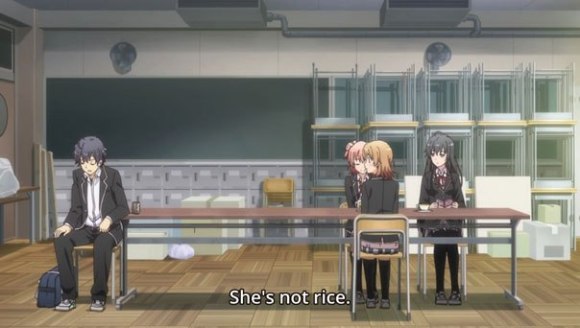 What made me like Oregairu is that it felt real – the characters, the scenarios, the plot itself.

I’m hoping for another season but since I heard that the light novel is still not producing enough chapters to get another season going I might have to wait.

Honestly, this article is not enough to fully express my love for this anime series. There’s just too much to talk about this that makes it a great series to watch and spend time to.