With the advancement of technology, we’ve seen more shows being released for every season. It’s quite amusing how before we complained about having less anime to watch compared to complaining now that there’s too much anime. But with the usage of tools that make shows easier to create, we’ve lost a certain aspect to anime that gave its charm a long time ago.

I do not claim to be an expert at animation but as a long-time viewer of the medium, there’s certainly a great amount of change within it that many folks might deem undesirable or otherwise. Back then, we heard of tools like cell-shading, manually drawing and painting each frame just to come up with pretty great animation.

We’ve seen countless videos and photos of Disney Studios or Japanese animation studios showcasing their animation process – how it was much more tedious and work-intensive compared to what animators can do right now with software like Photoshop, 3D animation, and the like.

There’s really something different between the animation process of years ago compared to now. You can truly see a hint of imperfection yet somehow, that element of animation made the entire project somewhat better and pleasing to look at. This is clearly evident on shows like The Wind Rises or My Neighbour Totoro where you can just really feel that authentic vibe in contrast to the more refined and cleaner animation we see in recent times.

Even without watching these shows, I am always at awe in seeing battle sequences from older anime like Evangelion and the Gundam series where despite the limitation in tools, they were still pretty cool to look at. I found the transformation scenes in Sailor Moon quite aesthetically pleasing and would gush on for hours with friends to how ‘sparkling’ it looks to the eye.

You could really feel that air of authenticity being projected into those shows in contrast to today’s anime where as technology makes it easier for studios to produce countless shows for profit, it sacrifices the one thing that made anime crawl out of its niche position in the first place – its charm.

Compared to the late 1990s and early 2000s, the shows of the 2010s gave the rise to the mediocrity when it came to animation. Before I could still count with my fingers on the amount of shows I dropped due to poor animation, horrendous storytelling and the like. But nowadays, there’s just way too many shows that don’t make an impact at all and you wonder how the process went for making those shows. 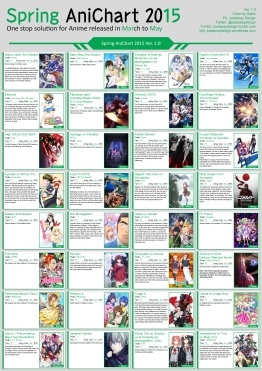 Over the years, I think the anime industry has been driving itself less on the creative aspect and more on the financial gain. This is evident on shows that get released solely to promote light novels, manga, a certain brand, or just an anime project that serves as a financial boost for a studio to finally garner the resources to create the dream project they’ve always wanted to do.

But by sacrificing on perfecting a show’s charm for financial gain, I think anime right now has opened itself to countless avenues for mediocrity. In a personal perspective, I believe studios should strive to be similar to Kyoto Animation which basically has perfected the art of moe at the moment. This is the studio’s charm and theme to all of their work and I think that’s lacking in most shows nowadays. Or, another example of charm would be Kill la Kill where nonsense battles and skimpily clothed magical girls were their point of attack.

We’ve seen shows like Ore no Twintails that just completely forego with this charm and just fall back on over-used jokes and punchlines to the point where you would probably just bang your head countless times on your table. Or how Sword Art Online, despite the opportunity it presented with its trendy themes of VR, it just came out as another typical harem anime.

Why can’t we have more shows like Your Name where even if we took away the glorious animation, the film would still hold on its own for the youthful and melancholic story it gave us? Or long running shows like Naruto where despite the drastic changes it saw to its animation process, it never faltered on the underdog themes it presented in its story?

Well, I guess we can’t ignore some shows have gone out to do their best at creating a something that’s left an impact like Violet Evergarden, Boku no Hero Academia and many more that relied on creating a story that leaves an impact on its audience for its relatability and other aspects.

If this culture of mediocrity and quantity over quality in the anime industry persists, then truly, we can never get to a point where we could call any era in our lifetimes as the “Golden Age of Modern Anime” similar to how we refer the classics as such. But hey, this is just a personal viewpoint and I could be wrong.

What do you think of anime today? Name a show that stayed with you for a long time and tell us why in the comments below!

One reply on “Balancing between charm and gains in animation”

I kind of feel the ratio of good shows to average to bad shows has stayed pretty much the same even though there are certainly more shows now. Besides, it is hard to judge older anime as a lot of it just wasn’t available outside of Japan and really only the stronger titles made it to a worldwide stage.
Personally I kind of like that anime is as prolific as it is. For all the average to bad anime out there, there are plenty of good shows that become available because of the streaming platforms that are now available. I feel much like books, the more there are the more choices there are for the audience and the more chance there is of stumbling upon that one that just speaks to you.