With summer at its peak from where I am, there has never been a point when watching anime was out of the equation. Being the romance-comedy loving freak I am, it’s not a surprise that most of the shows I’m getting into, at the moment, are really fluffy and wholesome. Now, let us talk Love Lab.

Love Lab is an anime adaptation of a four-panel manga series of the same name which aired in the year 2013. The show was produced by studio Doga Kobo which made similar shows like Gekkan Shoujo Nozaki-kun and Yuruyuri.

The whole anime series is set in a prestigious all-girls school and revolves around the antics of the student president, Natsuo Maki; her boyish assistant, Riko Kurahashi and other members of the student council. This all started when Riko accidentally walked into Maki kissing a body pillow with a picture of a guy for kissing practice. Now, she’s forced to teach Maki and the rest of the student council members on romantic activities like dates and such. 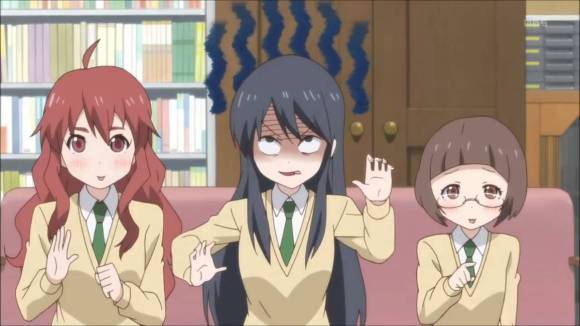 What got me really interested in this show is how over-the-top the comedy was and, by far, it has been hilarious. Especially with Doga Kobo’s unique and energetic way of differentiating serious and comedic scenes. The gradual transition of these characters from prim and proper to downright stupid and ridiculously funny – it’s just the right formula for depicting a show about cute girls at a lost in learning romance.

The chemistry between the two main characters has been clear and natural throughout the majority of the episodes. Maki’s bi-polar tendencies from calm and collected to downright foxy and stupid checks out with Riko’s common sense and unwillingness to back down from any request. The entire show’s setup of having to discuss a romantic activity per episode and then having Maki come up with some ridiculous plan to make it “extra-romantic” is essentially the meat of this anime series.

Still haven’t finished this show, as of this post, but I had tons of fun watching this anime series for its humorous take on romance through the eyes of innocent girls far away from the contact of boys. I highly recommend it if you’ve liked shows such as Gekkan Shoujo Nozaki-kun or Tsuredure Children. These shows are all similar in the way humor is presented as well as the tone.

Are you a fan of rom-com shows? Share some suggestions in the comments below!

[…] You want a more light-hearted and deeper impression on this show? Take a read on how Love Lab has quirky comedy and refreshing animation. […]