“Anime versus” is a new series I am starting where I talk about anime characters, shows, tropes and the like – their quirks and negative attributes, then show you a fresh perspective for the chosen topic. Every week, a topic or “case” will be chosen and we try to give a “verdict” on it. 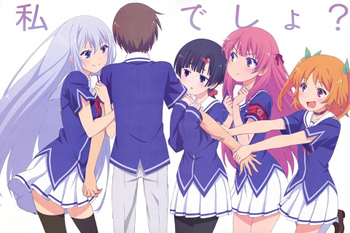 Being a core genre in anime, Harem, as a genre, has been a normal theme for shows that release every season. In this genre, the main protagonist is surrounded by multiple love interests and usually, the entertainment value stems from the aloof interactions between these characters and the rivalry.

Calling into this “case,” let us put harem protagonists into the spotlight.

The general re-occurring attributes for harem protagonists are usually being dense, stupid and insensitive for the feelings of his or her multiple love interests. Now, the main protagonist does this either intentionally or unintentionally – but mostly the acts are unintentional.

Whatever the intentions may be, a certain frustration stems among viewers in regards to the inability of a harem series’ main protagonist to perceive people’s emotions. The reason for this is, usually, people are rooting for these love interests and go into the famous “waifu wars” which happens every anime season since, for some reason, there seems to be an endless supply of harem anime.

An example of this is the anime series Nisekoi where it caused a significant impact on the anime community as people started betting for their favorite female love interest to have their love realized.

Although the entertainment, arguably, comes from the failures and aloof interactions happening between these characters as they compete in having their love realized, it all depends on how each anime series is written – which would be our focus for this. 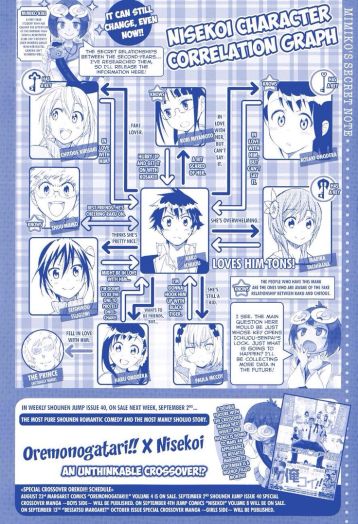 There are some instances where the writing for story and characters get so detailed that this polygon of love interests come with heavy, real consequences for both the protagonist and the individual persons. An example of this would be the harem portrayed in the anime series School Days.

In School Days, the main male protagonist, Makoto Ito, becomes interested in a shy girl named Kotonoha Katsura but doesn’t have the courage to interact with her. With the help of his female classmate, Sekai Saionji, he becomes close to Kotonoha and ends up being his boyfriend.

But it all falls down the drain when Sekai reveals her own romantic feelings for Makoto, and thus the two engage in an immoral relationship behind Kotonoha’s back. The cycle repeats until to the point where his actions become intolerable for Kotonoha and she snaps which ultimately ends to his demise.

School Days is a great example of how putting weight on character decisions in regards to how they affect the other players within the story. But this series seems a little bit too dark so let us go with something a bit more reasonable and lighter in theme. 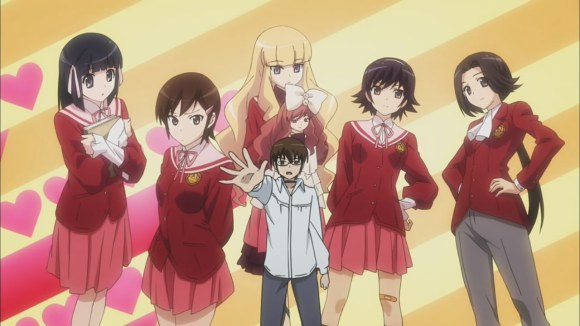 Another great harem series depicting this is The World God Only Knows where the main character, Keima Katsuragi, unknowingly signs a contract with a devil called Elsie and is forced to date multiple girls in order to force out the souls possessing them thus giving Elsie the opportunity to capture said souls.

The weight of Keima’s actions and moments shared with these individual girls is in the highlight during the third season where a number of these girls remember past romantic events that they have shared with Keima. Thus, this forces him to act much more carefully in order to avoid this whole web of romantic relationships crashing down upon him and the completion of his contract with Elsie.

These two anime series, School Days and The World God Only Knows, shows a unique aspect to the harem genre which is giving depth and proper definition to each individual character as one’s actions affect the other.

The generic trope for harem genre has always been a main protagonist grabbing love interests left and right without consequences. Although the interactions between these people are, without a doubt, entertaining. It just does not seem great anymore as this endless cycle of girls or boys liking a certain girl or boy without certain consequences.

Relationships are an important thing – romantic or not, and I think that most shows under the harem genre fail to see the entertainment in having these protagonists actually struggle and earn affection from women or men around them.

Despite the generic harem trope being entertaining, I find the idea of a protagonist showing effort in winning people’s affection gives much more entertainment and entitlement for the audience to care much more strongly for these characters.

Can you share some titles you loved in the harem genre? What do you think of the genre? Do you find the theme highly entertaining? Share your opinions in the comments below!

9 replies on “Anime versus Harem protagonists”

i have a brand new harem anime or manga concept featuring a normal 36 year man named Adam Manson he dies when a insane machete wielding maniac tried to rob his own jewelry store he dies when trying to protect his merchandise from being stolen.

Somehow, The Comic Artist and His Assistants ended up being one of my faves. That series went further than most in characterising the hero and female characters fairly and equally, and that contributed a lot to why I like it so much. It brought a lot to the already hilarious humour that you could laugh with these characters, because you cared about them and their goals.

Haven’t heard of this series. Seems rather interesting by how you put it. Will try to find time to watch it!

Grisaia no Kajitsu opened a new path of harem for me.
Kazami Yuuji is just… damn son!

I’ve always shied away from Grisaia due to the infamy it has stirred among my peers. Is it really that bad or there are just some few questionable parts of the show that I can ignore?

Funny because Yuuji works in his secret job as a ‘cleaner’. Each of the girls’ problems are weird but not too far from reality.

Ahh… Adding that to the many titles being listed on my now big list of shows to watch but never will. 😦

That’s all good my man! But if you come out scarred then I welcome you on my boat.

I’m a wimp and I’m scarred by that VN…