ANIME, FIRST LOOK – After being heavily recommended by friends, the anime series “Tsurezure Children” is now part of the short list of anime that I’ve watched out of the long list of anime which I haven’t. While it does give me some sort of entertainment and lives up to its genre of a romance-comedy, I can’t help but feel lacking from how it formats its episodes.

Tsurezure Children is an anime adaptation of the ongoing four-panel web comic which uses the same name which tells various narratives of how people struggle to confess their feelings of love to someone in a high school setting. 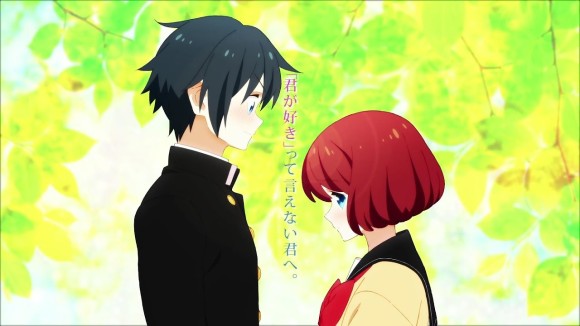 There’s something that makes it annoying though and that would be its usage of an omnibus format wherein a single episode is divided to cater stories from four or more couples and then on the next episode, there are now two or more couples introduced into the story which doesn’t really give me enough time to appreciate and like these characters.

While it could be because the web-comic itself is basically doing it in the same format, the anime adaptation should have shown at least four or five couples which have grown famous in the web comic’s audience.

With that kind of format, viewers wouldn’t have to be so confused all the time and try to connect the stories of two couples only to understand that, at the end, these are all separate stories and if they do connect, it’s just for the sake of making a connection in all the stories.

The anime adaptation tries too hard to integrate a lot of characters and couples in a 24-minute episode that it becomes too confusing for the average viewer to keep up and also leaves them bummed out when their favorite couple is not featured in that episode just because the anime has to stay true to its omnibus format.

Ranting aside, Tsurezure Children got me hooked on its attempt to portray the different struggles of conveying your feelings to someone you like while making it humorous for the viewer.

The couple I’ve grown fond of is the “Student Council President and the Delinquent.”

I don’t really know why but there’s always some sort of charm when a individuals in a certain relationship are the exact opposites of each other and that’s what makes their love stronger.

It has this poetic and ironic feel to it which I personally love in any couple.

Generally, Tsurezure Children is a great anime series to pass the time and really doesn’t try to get any further other than showcasing a bunch of new couples every other episode and how they find trouble in conveying their feelings to each other whilst doing it in a humorous way.

Tsurezure Children is licensed by Funimation in North America and can be streamed in Crunchyroll. Other than that, there’s no other service that I know of.

What do you think of Tsurezure Children? Do you like the show’s episode format? Who’s your favorite couple in the series? Let me know in the comments below.