ANIME, FIRST LOOK – As the summer anime season starts, there is this one show that has caught my attention: Koi to Uso or in English, Love and Lies. After watching the first episode, allow me to share my thoughts and reactions to this brand new, interesting anime series.

The first episode starts off with an explanation that Japan’s government makes arranged marriages for people starting from the age of 16 and on-wards. This means that by the age of 16, the government will determine your future wife/husband through genetic compatibility. This has been done in order to help out Japan’s declining birth rate.

Most of all, those who do not follow to the government’s orders will be met with severe penalties.

Our main character, Yukari Nejima, does not want this to happen to him. He wants to be able to love a person willingly and not by pre-determined partners from the government. So, he sets out to confess to his long time crush, Misaki Takazaki, and discovers that she feels the same way.

The major heart-wrecking part is that as Misaki and Yukari share an intimate moment, they are interrupted by Yukari’s text message from the government regarding about his future assigned wife.

At first we see Misaki’s name on the message but it quickly alters to another woman’s name, Lilina Sanada. 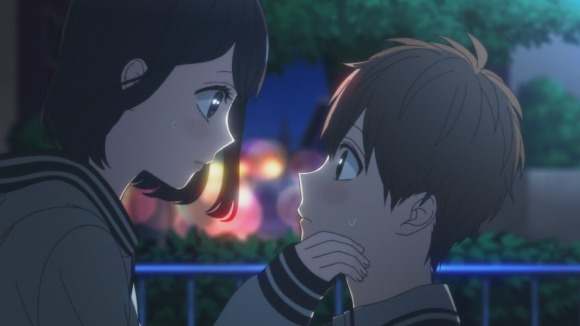 I am not happy.

The two still vow to, one day, be together someday – despite being against the government and all.

It’s not so unique since there have been many films, shows and even anime which show main characters being taken out of their will in order to be paired up with someone they barely know.

But usually it ends up into a romance-comedy series where these two strangers develop feelings along the way and actually, end up together despite initial hesitations.

I’m looking at you, Nisekoi.

In Koi to Uso, the setting is very different. We have a couple determined to solidify their love for each other despite being against the social norm. As a viewer, I am very excited on how this will turn out in the next few episodes up until the end.

Will our two characters end up together? Will it be a love triangle? Will they be arrested? Who knows.

I am very much excited for this show’s potential and I can’t wait on what path it’ll take us, viewers – either a reasonable route or just straight-up make Yukari an undercover government worker who will eventually alter these government files, cheat the system and voila! The problem is solved.

What do you guys think? Have you watched Koi to Uso? What are your impressions? Let me know in the comments!

One reply on “Koi to Uso” – a love-tragedy in the making?”

[…] KOI TO USO” – A LOVE-TRAGEDY IN THE MAKING? by MIANDRO over at Miandro’s Side – I really want to see this anime now and I am not really all that keen on romances. […]