I had a lot of character to pick from while I was thinking about this article: Yuki Nagato and Tsuruya from the Haruhi franchise, Kanbaru Suruga from the Monogatari series, and others.

However, after much thought and consideration, I think that no one can beat Hanekawa Tsubasa from the Monogatari series as a supporting female anime character.

Hanekawa is the close friend of Koyomi Araragi, the main protagonist of the series. She is known to be an overachiever and model student admired by many people – a class representative at that. However, unbeknownst to most people, Hanekawa has been through some tough waters.

The abuses she has received from her tense family life is overshadowed by her multiple achievements and “goddess” personality. Due to that, she was possessed by an oddity which gave birth to her darker self – “Black Hanekawa.” 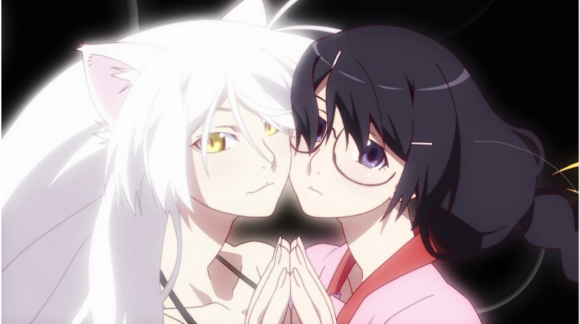 As she assumed this alternate personality, she was responsible for various attacks on the people in town.

I have to note that the reason of her possession and her dark self was because of the accumulation of stress she’s received throughout her life – family trouble, rejection in love, social expectations. Really, it is quite enough for someone like her to break down easily.

Hanekawa was always deemed as someone who could be relied on by Koyomi. Although she denies being smart, she is a bank of wealth and proves to be important whenever the situation arises.

In her arc, we realize that Hanekawa tries to dump all of her imperfections and ignores them – resulting to this build-up of stress that got her bewitched by the “Black Hanekawa” oddity.

Another thing to note is that Koyomi has always regarded Hanekawa as the “ideal girl” and has almost treated her as this sacred individual.

After Hanekawa’s confession to Koyomi of loving him, she was rejected despite his claims that he was the “ideal girl.” It was at this moment that you can feel a sense of sympathy for Hanekawa as she weeps to her rejection – despite being fully aware that Koyomi already has Senjougahara, his girlfriend.

I mean, it is very sad to see that a character so pure, righteous and ideal just like Hanekawa can meet such the most cruelest of fates. However, despite all of that hardship, she has proved to be stronger and has grown to be more mature out of those problems.

Honestly, Hanekawa Tsubasa is one of those anime characters who were written to be “ideal” and “perfect” but they get hit with the most despairing stuff every single time and yet, she still perseveres despite all of that.

If Hanekawa was embodied into a real person which I knew, she’d get my fullest and deepest respects – hell, I’d fall head over heels for an individual like that.

Imagine – abused and rejected despite being the an achiever, the “ideal” girl. It shows how life can be unfair to everyone and it is up to the person to choose how he or she gets out of this predicament alive and stronger.

Hanekawa Tsubasa is the best example of a strong, independent woman who need no man to look after her. She’s seen some sh*t and has done her damn hardest to un-see it.

Also, allow me to share this glorious clip of a bewitched Hanekawa Tsubasa reciting a tongue twister:

She is the best girl, which is saying a lot because Monogatari has a ton of likable characters. I could watch that tongue twister all day.

I only saw the first two seasons, and yeah, I love that tongue twister scene. Her OP song is also cute, but I think I remember the snake girl’s OP more. XD

The openings in the series are always entertaining to watch and catchy to hear – they aren’t really forgettable. You should continue watching the entire thing.

Not afan of Shinbo’s later anime. They became so fan service pandering that I just can’t handle them. Haha

Well, I ignore most of the fanservice that Akiyuki Shinbo throws at me so.. yeah.